Be the fastest to recover pellets or you'll be the one that gets crushed. 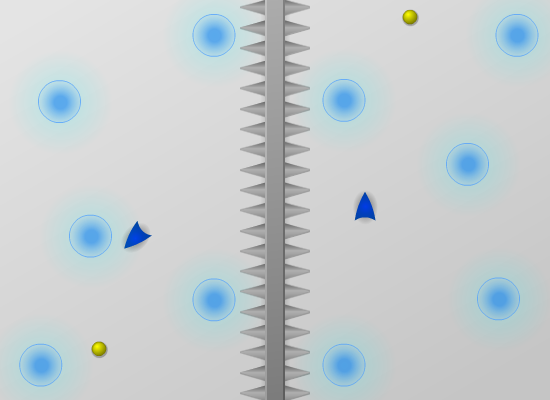 In speedCatch, two players strive for survival by collecting yellow pellets as fast as possible.
The screen is divided by a spiked wall, and sprinkled with slowing zones. A pellet awaits on each player's side. When collected, it causes the center wall to move away from the player who picked it up, thus reducing the room the other player has. Of course, they can — and must — retaliate by picking up pellets of their own. If a player touches the center, he instantly looses the game.
In the game, you'll be constantly looking around for pellets, and racing to them, avoiding slow-down zones, anxious to shave a few fractions on second from the time it takes you to get there, trying to slowly push the wall towards your opponent, or sometimes, just striving for survival, avoiding the fatal moving wall.
The game features CPU opponents of which you can set the level. Practice against stronger and stronger AIs then challenge your friends to beat you.

The music is Kai Spitzley's, who kindly allowed its use.